According to a report from SBM Intelligence, a Lagos based Research Firm, prices increased in nearly every segment of household goods and consumables between July and December 2015 which indicates the effect of the weakening Naira against the dollar.

The report revealed fairly unstable prices of imported goods while locally produced consumer goods have maintained stable prices over the last six months. Transportation, insurgency and stability, climate change, availability of labour, climate change and exchange rate fluctuations are some of the major reasons for the price increase recorded and a possible devaluation of the Naira could make the situation even worse.

Here is how the fall in Naira has affected the prices of food commodities: 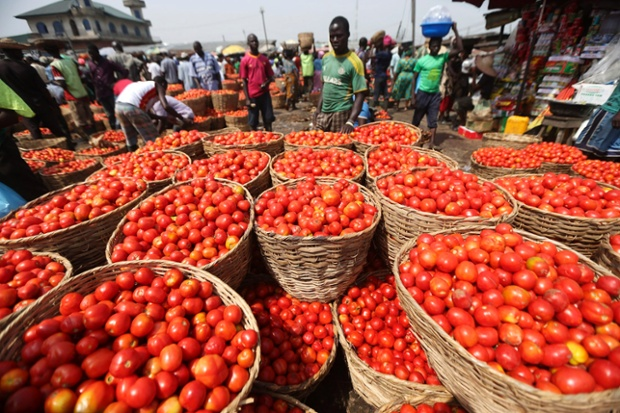 Tomatoes, one of the most common perishable commodities in Nigeria, sold in Lagos, at an average price of N679.50 for a paint container (6 litres; 2 kilograms) over the past six months compared to N540 in first quarter of 2015 and N500 in fourth quarter of 2014 which implies an average increase of 26 percent.

However, the prices varied in various markets across the federation. On the average, a paint container of tomatoes was sold for N425 in Wuse (Abuja), N325 in Onitsha, N300 in Bodija (Ibadan) and N140 in Sabon Gari (Kano)

Beans, a common staple, maintained a relatively stable price over the second quarter of 2015, with the price staying constant in most places and recording slight drops in January 2016 in a few places but some sharp rises in others.

The same measure of beans held steady at N100 for the entire period in both Onitsha and Awka, but, in both towns rose sharply to N350 in January. Traders blamed a shortage of supply because of the season. In Ibadan the same measure cost N150 all through the survey period, with the exception of July 2015, when a derica (400g) of beans cost N130 in Bodija, Ibadan.

Fresh vegetables the popular green leaf (soko & tete), water leaves and pumpkin leaves (ugwu) all maintained stable prices because of their relative abundance in the markets. Prices for these items were similar all over the country while other consumable items with import components like bread, sugar, noodles, among others maintained fairly stable prices over the period in review.

This Is What Kills Men