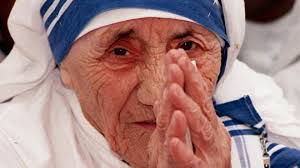 Mother Teresa of Calcutta, one of the most iconic figures of the 20th century, is set to become a Catholic saint on Sunday in an open-air Mass led by Pope Francis. Father Brian Kolodiejchuk, the Canadian priest who promoted her sainthood cause, said on Thursday in Vatican that hundreds of thousands of faithful are expected to attend the canonisation service to be led by Pope Francis in front of St. Peter’s basilica. He said that her canonisation is one of the highlights of Francis’ Jubilee of Mercy. “Affectionately called the “saint of the gutters” during her lifetime, Mother Teresa of Calcutta will be made an official saint of the Roman Catholic Church on Sunday, just 19 years after her death.
“The Church defines saints as those believed to have been holy enough during their lives to now be in Heaven and able to intercede with God to perform miracles. “She has been credited with two miracles, both involving the healing of sick people,’’ he said. Kolodiejchuk said that Mother Teresa was one of the most influential women in the Church’s 2,000-year history, acclaimed for her work amongst the worlds poorest of the poor in the slums of the Indian city now called Kolkata. He said critics view her differently, arguing she did little to alleviate the pain of the terminally ill and nothing to stamp out the root causes of poverty.

I’m innocent of the trumped up allegations leveled against me- African Development Bank’s president, Akinwunmi Adesina

Jude Okoye did his best to help Cynthia Morgan and May D’s careers – Singer, J.Martins